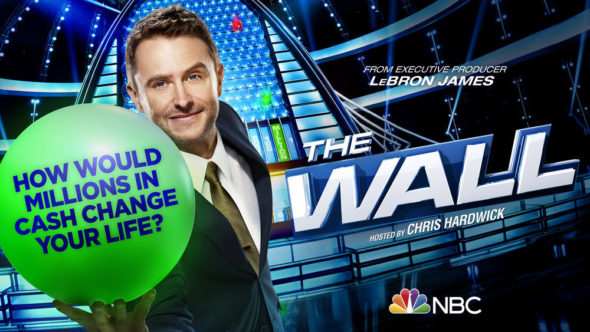 Airing on NBC, The Wall TV show seems to have become a bit of a utility player — filling in gaps in the primetime schedule as needed. Is that enough to keep the series on the air in the future? Will The Wall be cancelled or renewed for season five? Stay tuned.

A game show, The Wall TV series is hosted by Chris Hardwick. The competition series follows pairs of players as they pursue a cash prize of up to $12 million. When a team answers a trivia question correctly, a green ball drops from the top of the grid-like wall and bounces randomly toward the bottom of the four-stories high structure. At the bottom of the wall, the ball will land in one of many slots, each with a value of $1 to $1 million. That value is added to the team’s total winnings. If the team misses a question, a red ball descends toward a random slot. The resulting amount is then deducted from the team’s total. In this game, players need both the answers and lucky bounces, to win a big cash prize.

The ratings are typically the best indication of a show’s chances of staying on the air. The higher the ratings, the better the chances for survival. This chart will be updated as new ratings data becomes available.

8/10 update: You can see the latest night’s ratings in context.

Note: If you’re not seeing the updated chart, please try reloading the page or view it here.

For comparisons: Season three of The Wall on NBC averaged a 0.53 rating in the 18-49 demographic and 3.18 million viewers.

Note: These are the final national numbers (unless noted with an “*”). These are different from the fast affiliate numbers which are just estimates of the actual ratings. The final nationals are typically released within 24 hours of the programming or, in the case of weekends and holidays, a couple days later.

What do you think? Do you like The Wall TV series on NBC? Should it be cancelled or renewed for a fifth season?