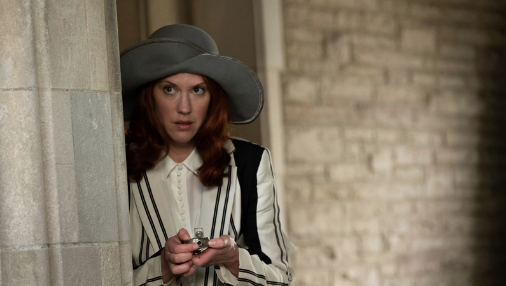 Frankie Drake Mysteries was canceled earlier this year by CBC, but fans on Ovation will still see the end of the series. The network has ordered the final season of the drama and a musical special. Lauren Lee Smith and Chantel Riley star in the series which follows Drake, the first female detective in 1920s Toronto.

Ovation revealed more about the upcoming season of Frankie Drake Mysteries in a press release.

“Ovation TV, America’s only arts network, has acquired the U.S. broadcast rights for the fourth season of Frankie Drake Mysteries from DCD Rights. As part of the network’s Mystery Alley programming block, the deal includes the fourth season (10×60’) of the drama series as well as a musical special titled Frankie Drake Mysteries: Music at Midnight (1×60’) featuring the Toronto Symphony Orchestra (TSO). The announcement was made today by Scott Woodward, EVP Programming and Production, Ovation.

Set in 1920s Toronto, the series follows the adventures of Frankie Drake (Lauren Lee Smith) and her partner Trudy Clarke (Chantel Riley) at Drake Private Detectives, the city’s only all-female detective agency, as they find themselves fighting crime in the age of flyboys, gangsters, rumrunners, and speakeasies. Season four of Frankie Drake Mysteries opens with our intrepid detectives and their best gal pals, Mary Shaw (Rebecca Liddiard) and Flo Chakowitz (Sharron Matthews), traipsing through the woods on a scavenger hunt that quickly turns deadly. From the wilderness to the world of high society, from an underground cabaret to a candy factory, Frankie and Trudy investigate murders, kidnappings, heists and poisonings. Using her position as a morality officer, Mary’s able to snoop through police files and be privy to non-civilian discussions, while Flo lends a hand with autopsy reports, science experiments, and her newly acquired medical skills.

“Having the Toronto Symphony Orchestra perform on the Frankie Drake set was an amazing opportunity to combine Ovation’s mission of celebrating artistic expression with a fan-favorite drama series,” stated Woodward. “Mixing the art of storytelling with the art of music is the perfect blend of programming that Ovation is always looking to share with our audience.”

International distributor Nicky Davies Williams, CEO, DCD Rights added, “A huge hit with viewers around the world, we are delighted that Frankie Drake Mysteries will continue to be broadcast on Ovation, one of the world’s foremost arts and entertainment networks.”

Both the special and the fourth season will air this fall.”

What do you think? Do you plan to watch the final season of Frankie Drake Mysteries on Ovation?